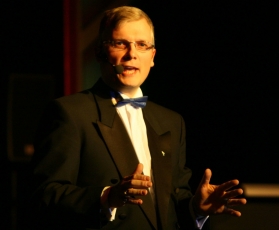 Daniel started organ lessons when he was just 8 years old and, the age of 12, began playing in public all over Northamptonshire helping to raise money first of all for his local school and then several local charities including the "Northamptonshire Guide Dogs For The Blind", and at that time "The Falkland War Veterans Association" for whom he helped to raise over £3000 in a series of charity concerts with other local performers.

At the age of 16 Daniel left school and turned professional forming a trio with a drummer and a singer who when Daniel turned 20 decided to retire which left the duo, which toured local clubs playing for dances until Daniel started to appear as a solo act which he still does today in clubs and dance halls all over the country.Daniel was then booked by Sceptre promotions, which produce the 3 largest Keyboard Festivals in the UK at Pakefield & Blackpool, and has since joined the team and now helps to organize their Stage Management and Sound Levels.

As well as performing in concert & playing for dancing at the festivals for the last few years Daniel has done a series of morning teaching sessions on the uses of "Computers in music" showing people how to create their own big arrangements  and program drums to fit there specific songs in the home and has now moved on to doing musical teaching sessions regarding “Big Band Left Hand & Pedal Techniques” which are available as Audio CD’s.

He also became involved in the running of the Barton Hall Festival in Torquay during its last few years performing there and also doing the stage / sound management & the Lyme Bay Keyboard Festival for it’s first 2 years. When they were first launched the very first range of organs, Roland asked Daniel to demonstrate their new range of Atelier organs unfortunately due to other commitments he was unable to complete the offer. But he has had past associations with Hammond, Godwin Casio and Wersi for whom he became an agent in the UK for their latest OAS range of instruments until 2006 when a new importer was found, he also has a full range of sound software as well as a brand new teaching CD set called "Getting To Know Version 6" & an additional CD covering the changes made in “Version 7”which is available from him direct.

By the time Daniel was 25 he had his own recording studio and has so far produced 14 of his own CD’s. The first was 'Spanish Garden' and that was followed by “Reality”,“Anything Goes”, “Isle of Dreams”, his first dance CD “Stranger In Paradise”,“Adagio”, “Morning In Cornwall”, his second dance CD “Ice Castles”,“Somewhere” and “Games That Lovers Play” (which is a tribute album to the sound of James Last). Daniel's latest recordings, all use the OAS EX1 Expander with his beloved Wersi Spectra and are 'Pavane' 'Aquarius' and the newly released “California Dreaming” which was released in conjunction with his latest dance CD “Let’s Dance” in January 2007 & with a new CD “Elan” to be released in early 2008 the recordings continue. As well as his own CDs Daniel has been included on both “Key Sensations Volume 1 & 2” CDs, which are, compilations produced in Germany by Manual Music of all the top European organists. Through his recording studio & label of Delapre Studios, Daniel has produced CDs for many of the other top organists on the scene today including Peter Hayward  (producing all his CD’s since 1999), Penny Weedon, Richard Bower, M2 (A Female Dutch Organ Duo), the late Margaret Mason, Michael Brent, Ian Griffin & Esquin Rijnaard to name but a few of his many clients.

Daniel also took time from his busy schedule to compose several pieces of music, the first being 'Spanish Garden' and others including 'Coming Home', 'Isle of Dreams', 'Storm' and 'Miss You Always' which he says is dedicated "To the only woman in the world patient enough to put up with me".

From the age of 16 to 36 Daniel has also been lucky enough to share the stage with many of the big names in the organ world such as Mark Shakespeare, Franz Lambert, Curt Prina, Mark Whale, Claudia Hirschfeld, Hady Wolf, Tony Fenelon, Hector Olivera, Brian Sharp, as well as “American Artists” such as Seth Rye, Tommy Johnson, Steve Eaklor, Choy Lozada, Hal Vincent, O’lyn Callahan,  Bill Horn and many more as well as playing around the world in France, Austria, Germany, Spain, Canada, Holland, and America at Bill Horn's Music Festival in York Pennsylvania USA.

He now makes regular trips to the United States playing in concert and teaching & over the past 5 years has made 22 trips to the USA visiting cities like Tampa, Washington, Chicago, Denver, Los Angeles, Monterey, Carmel, & San Francisco, and has performed at Bill Horn's Music Festival in Lancaster Pennsylvania 3 times over this time, last year as part of a two week tour of the USA when he also worked for Ralph Conti the Wersi importer in the US for the second time performing Mini Concerts & Workshops.

Daniel will also be featured at the following festivals this year.