OrganFax news brings you all the latest from the world of the organ and keyboard. From new product launches, to festivals and other exciting events. Please feel free to contact us with any news you would like featured on this page.

Christmas is fast approaching and so is Key Breaks turkey & tinsel event in Torquay...

Rooms are now limited for this event so if your looking for a pre Christmas treat with great company, fabulous music, amazing views & lots of entertainment this event is for you!

It is now less than 8 weeks until Brett Wales & Chris Powell are hosting their next festival at The Stratford Manor Hotel.

Always a sell out... there are only a few rooms remaining for this fantastic event which will be running from 2nd - 5th October 2015 and who can be surprised with a great line up including their very own Brett Wales & Chris Powell & guest artistes John Mann, DirkJan Ranzijn, Nicholas Martin, Ben Scott Hyde, David Harrild & Pete Shaw.

The amazing World Champion accordion player Gianluca Campi is coming to the UK to perform at the Folkestone Accordion Festival September 25th-28th. With a supporting cast of Jovan Rnjak, Sammie Catling, Nigel Pasby, Harry Hussey and our own John Romero this is a weekend not to be missed. Our recommendation is to set the timer on the above video to 12.35 and stand by to be blown away!

More information including the programme a... Read more.

Top Yamaha Player Peter Baartmans is to appear at the East Sussex National Organ & Keyboard Festival. The festival, running from 9th to 12th October, is for residents only. Organiser Michael Wooldridge said he was truly thrilled to have such a wonderful player completing an already star studded cast, along with other top line artistes including John Mann... Read more.

The Association of Organ Enthusiasts is holding its Summer Break, at the Mercure Kidderminster Hotel, Habberley Road, Kidderminster, in the heart of rural Worcestershire, commencing on Monday 29th June. The residential event, our twenty-sixth at this venue, which runs for five days, is primarily a get-together for members, but there is ample capacity for day visitors, members or non-members, at a cost of just £5 per day which includes all sessions. 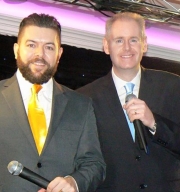 Starting on Friday 31st July and running for 3 nights, Key Breaks are hosting their next event at to the amazing 4* Park Royal Hotel which is perfectly situated for Chester, Liverpool & Manchester and just a couple of minutes from the motorway.

Live locally? Why not join them for an evening visit to 'samp... Read more.