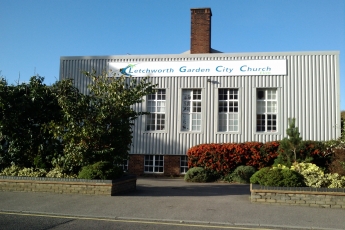 The Society was originally formed in 1979 after a committee of music enthusiasts invited former members of the old Hermitage Organ Society ( Hitchin ) and the associates of the Cinema Organ Society ( Luton ) to start a new society, which was to be  named the Stotfold and District Organ Society. The member base was around 50 and they met at the Stotfold Social Club, who were the owners of a Christie Organ.

One of the first professional organists to play for the society was Robert Wolfe, who made regular appearences together with others to play the Christie Organ, as did the members. This arrangement with the Stotfold Social Club continued until 1985 when it was decided to move into the Free Church Hall in Letchworth. In 1987  the Stotfold Social Club closed and at the A.G.M of the Stotfold and District Organ Society it was decided to change the name to the North Herts Organ Society. The Christie Organ was moved to the Gordon Craig Theatre in Stevenage where it still resides today.

Another move took place in 1991, when the North Herts Organ Society changed its venue  to the Plinston Hall in Letchworth. The first concert was held on 27th March with Brian Sharp playing his own Yamaha HS8. In 2004 we celebrated our 25th birthday with a dinner/concert, guest organist for the night was James Goff.

Late in 2011 we were advised by the Plinston Hall that they would be closing for the whole of 2012 for reburbishment.  This meant we would have to move to another venue.  We were lucky to find a new location in Letchworth Icknield Center , the facilities offered are very modern and better than we could have wished for, a modern sound system, and three cameras are at our disposal, together with a technician to operate them.  The venue was introduced to the membership at our AGM and a concert was given by Mark Thompson, we had some very nice comments and calls to say how much the membership liked are new venue.  We hope we shall not have to make any more moves for a long time.

In Jan 2016 We were proud to elect  Mr Paul Carman as President of the Society  and thank him for his support over the years .

We are pleased to announce that the N.H.O.S is now a member of the Friendship Centre Federation. The F.C.F is an organisation bringing together nationwide groups and clubs.  Each group/club organises its own individual activities, but all other groups in the Federation may join in as and when they would like to. Activities on offer include, a Ski Group, a Golf Group, a Computer Group and many others. The Federation has their own website www.fcfed.com  where you can find many other groups listed by area, who also have their own websites, direct access to N.H.O.S site is www.fcfed.com/feanhertsorgan.htm or through the main page, members, by region, east anglia. There is also a bi-monthly newsletter available on the home page.

The Society usually meets on the first Wednesday of each month. Concerts start at 7.30pm.  Doors open at 7pm.

Members:- £9.00.   Guests:- £12.00  First time guests who become members on the night of their visit will have their admission free for the night.

New members are always welcome, please pass the word around to friends and aquaintances.

Newsletters are sent by E Mail to members addresses, printed copies are available to be collected on concert nights from the front desk  for members without E Mail. . At the moment nearly 50% of our membership receive newsletters by E Mail. But we would still like to increase the take up, any members who are interested in receiving their newsletter by this method, please send your email address to the secretary for inclusion. This method also proves to be invaluable method of contacting members in an emergency, as in one instance we had to cancel a concert at short notice.

Thank you to the members who have joined the E Mail system.  We hope you like receiving by this method and will continue to support this method as it saves the society a lot of money, allowing us to keep our entrance fees down, should there be any problems please don't hesitate to contact your committee.

We would also appreciate input from members regarding concerts, visits to festivals and the like, in fact, anything you may consider interesting to other members.  This also applies to the Organfax Website.

You will see below we have updated the concert diary.  A few new Organists have been included, and we hope you like our choice.  If you click on the blue names you will be taken directly to the Organists own website, where there will be a lot more information about them.  Hope you find this useful.

Click on the map and drag around to get a better idea of where our venue is. You can also zoom in. Click on the marker to see address details.